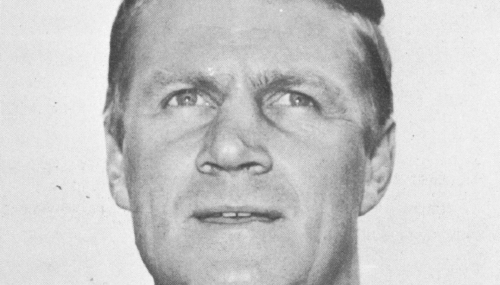 A supremely skilled and highly versatile player, Bob Withers was a star of NTFA and interstate football throughout the 1960s. After hanging up his playing boots he became one of the most prolific coaches in the history of Tasmanian football, spending 17 seasons as a senior coach with four clubs.

Born in Victoria, Withers first played football with the South Melbourne Fourths in the VFL and was captain of their undefeated premiership team of 1949. In 1950 he moved to Port Melbourne in the VFA, starting in the thirds and gradually working his way up the ranks. He finally made his senior debut in 1951 and would go on to play 137 games for the club from 1951-1959, including the 1953 premiership. He would also gain VFA selection during this time, representing the Association every year from 1957-59.

Withers moved to Tasmania to take up the role of captain-coach with North Launceston in the NTFA in 1960. In his first season the Robins played off in the grand final but were beaten by a strong City-South side, while Withers himself was awarded his first Tasmanian interstate jumper in the legendary seven-point victory over the VFL at York Park. The following year saw the first of Withers’ two premierships with North Launceston, Withers himself emerging the match winner. With his side five points down deep into the final quarter against Longford, he took a controversial mark inside 50 and calmly slotted the goal to give his side a heart-stopping one-point victory. 1961 also saw Withers achieve arguably the greatest accolade of his career when he was named All-Australian after a sensational 1961 National Carnival in Brisbane, the only Tasmanian to be recognised.

Withers’ second premiership in 1963 was almost a carbon copy of the decider two years earlier, with North Launceston again triumphing over Longford, this time by just two points. Withers also represented Tasmania on a tour of both South and Western Australia during this year, emerging from the tour as the recipient of the Lefroy Medal as his side’s stand-out performer.

After the Robins’ 1967 grand final loss to East Launceston Withers resigned as coach of North Launceston and retired as a player. In eight seasons as captain-coach of the club Withers had played 165 games, cemented himself as one of the finest players in the state and guided his side to seven finals appearances in eight attempts for five grand finals and two premierships. He had also represented his state on 15 occasions and the NTFA for seven consecutive years between 1960 and 1966, yet amazingly never won a club Best and Fairest award.

In 1968 he joined Launceston as coach and the following season led the Blues to a premiership, the club’s first since 1951. He departed the Blues after that triumph and spent 1970 as an assistant coach under Jack Clarke at Essendon in the VFL. He returned to Tasmania the following year to once again coach Launceston, but there would be no further premierships and Withers left to join Devonport in the NWFU ahead of the 1975 season. Half-way through 1976, Withers was deposed by the club’s board, prompting him to take a temporary break from coaching. He spent 1977-78 in the commentary box calling NWFU matches for radio, but returned for one final challenge as a senior coach, taking charge of East Devonport for a one-year stint in 1979. His contribution to the NTFA over nearly 15 years was honoured when he was inducted as a ‘Living Legend’ of the NTFA.