Double Win Against The Storm 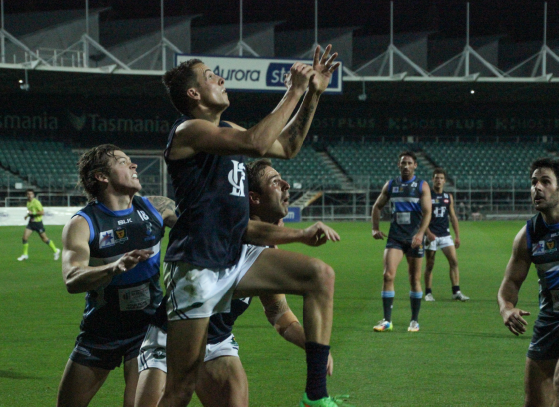 The weekend got off to a fantastic start with a truly memorable and gutsy performance by the Blues at Aurora Stadium under lights.

With Sonny Whiting going down earlier with a foot injury, Ryan Sheppard and Tim Gibbons colliding, Scott Stephens copping a hip to the head, fracturing his cheekbone and breaking his eye socket in 3 places plus Jack Donnellan hurting his shoulder – and all this in the first quarter, we were up against it early but the Blues soldiered on, defeating the Storm by 3 points.

Scuba returned to the field and lead courageously with a team high 30 possessions and 12 marks. Jack Donnellan continually threw himself at each contest, each time receiving more cheers from the crowd. He copped a hit from Bart McCulloch in the 2nd quarter who was then reported (received a reprimand with early plea) and the Blues fired up and that set the tone for the rest of the game.

Zac Oldenhof, Brennan Savage, Tom Claridge were fantastic down back, giving the Storm little to work with. Joe Boyce completely shut Zane Brown out of the game, whilst Sam Rundle and Joe Groenewegen controlled much of the game around the ground,.

But it was certainly an inspired team performance where everyone worked extremely hard and didn’t stop all game, running themselves to the point of exhaustion battling an opponent who still had a full rotation.

Make sure you get along to the footy this year and watch as this team continues to grow, exciting times ahead.