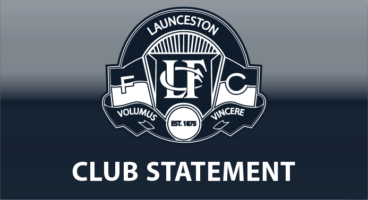 The Launceston Football Club is extremely disappointed for our current senior coach Sam Lonergan, after the Court of Arbitration ruling found the Essendon Football Club’s 34 players guilty, which means Sam will be unable to coach and play for our club in 2016.

We are currently working alongside the AFL and AFL Tasmania to further determine all that this decision means for our football club and for Sam moving forward.

The Launceston Football Club will do everything in its power to fully support Sam and his young family.

Sam is an exceptional person, both on and off the field. As a club, we have been involved directly and indirectly with Sam since 1999 when he was playing for the Blues as a junior. Over this time, we have watched him grow and mature as a person and have been extremely proud with all that he has accomplished so far in his career.

We will always do whatever we can, to fully support our players through all situations.

Our club will continue to grow both on and off the field, and we are still very focused and determined on having a big 2016 season.

In the meantime, the club will look at its options in appointing a coach for the 2016 season. This announcement will be made in due course.

We thank each and every one of you who has sent through messages of support to the club, Sam & his family.